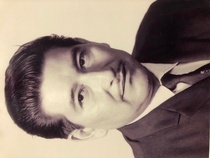 Bernardino Alonso Espinosa (Berna or Benito) of Chicago, Illinois passed away on Saturday, August 15, 2020 at the age of 86.  He was surrounded by his beautiful wife (Linda) and children, Angela Alonzo-Onate (Manny), Jesse Alonzo (Valencia), Rose Cavazos (George), Joe Alonzo (Laura), George Alonzo (Yolanda) and Veronica Ivan (Joe).  He was a proud and doting grandfather to Jesse Jr., Dakota, Sarah, Ricardo, Rachel, Cristian, Gabriela, Sophie, Olivia and Chloe.   Berna was born in Cupareo, Guanajuato, Mexico on May 24, 1934 to his father, Jose Alonso and mother, Angela Espinosa.  The oldest of eight kids, he immigrated to Chicago, Illinois with his wife looking for the American dream.

He became a life-long White Sox fan when he arrived in Chicago. However, once his sons explained the game of football to him, he became an avid Bears fan who would not miss a game. He loved music and would always have his radio on while working in the garden.

Berna was a friendly, easy-going man who embraced everyone he met. He literally gave his shirt off his back to many throughout his life.  First and foremost, he was a family man at heart. He loved his wife, kids, sons-in-law, daughters-in-law, and grandkids.  He was the epitome of what a husband, father, father-in-law and grandfather should be.  Everyone admired the way he can start a conversation with a total stranger and he would make it feel like they knew each other for years. He saw the beauty in people and the world. He always had a smile every day, especially when the Chicago Bears won. His kindness and his love will live on through his children and grandchildren because that was how he taught and raised us.

Berna will be greatly missed by his many loved ones here on earth. He will be welcomed with open arms by God and his loved ones that have preceded him in passing.

IF YOU PLAN TO ATTEND MASS YOU MUST REGISTER WITH THE FUNERAL HOME/CHURCH DUE TO COVID CONTACT TRACING. THANK YOU. 9773) 927-6424

To order memorial trees or send flowers to the family in memory of Bernardino Alonso, please visit our flower store.