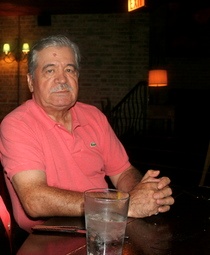 Enrique “Henry” Puente passed away on March 4, 2016 at Northwestern Memorial Hospital. Enrique was born in Cupareo, Guanajuato on October 15, 1944 to the late Enrique Puente and late Josefina (Martinez) Puente. As a young boy, Enrique excelled at school even though he was the class prankster. The townspeople could hear his incessant whistling and singing wherever Enrique went. Before Enrique immigrated to the United States, he served in the Mexican military.

In 1969, Enrique moved to the Bridgeport neighborhood in Chicago. He met his beautiful future wife, Eloisa Mendez, who lived in the next-door apartment at 26th and Canal. Enrique married Eloisa at St. Gabriel Parish on August 26, 1978. He formed a strong bond with Eloisa’s great uncles Oscar, Bob, Mike, Nick, and Arnold and great aunts Olivia, Magdalena, Sally, and Rosa. A few years later, Enrique and Eloisa had their daughter, Stephanie.

Enrique worked for 30 years at Chicago Northwestern and Union Pacific Railroads. He maintained perfect attendance at work during those 30 years. Enrique’s charismatic personality and hard work won over his colleague’s respect.

During retirement, he enjoyed spending time with his family and friends, cheering on the Chicago White Sox and Chicago Blackhawks, and exercising at the Lawndale Christian Health Center.  One of the proudest moments in Enrique’s life occurred in 2014 when his daughter, Stephanie, graduated law school and passed the Illinois Bar Exam.

He is survived by his wife of 37 years, Eloisa; his beloved daughter, Stephanie; his mother-in-law, Agustina; his sister-in-law, Amalia; his brother-in-law, Abraham; his brothers, Rigoberto and Guadalupe; and his sisters, Margarita, Angelita, Luz, Raquel, Lila, and Celia. He will be missed by his many nieces, nephews, and friends.

To order memorial trees or send flowers to the family in memory of Enrique Puente, please visit our flower store.
Send a Sympathy Card