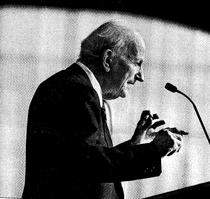 Gary Becker, a University of Chicago professor who received the Nobel Prize in economic sciences, broke new ground in his field by using his craft to analyze social issues such as addiction, crime, human capital, discrimination and family relations.

Despite an early career filled with controversy fueled by leading economists who questioned the value of his work, Mr. Becker went on to become one of the most cited scholars in his field.

"He was very fearless in his thinking and willing to go against the crowd," said his stepson, Mike Claffey. "Even as a kid growing up in Brooklyn, he became a Yankees fan. He used that fearless thinking and applied it to the economics of human behavior."

Gary Becker taught at the U. of C. for more  than four decades. His mentor was famed U. of C. economist Milton Friedman. The school honored them in 2011 when it created the Becker Friedman Institute for Research in Economics and named Mr. Becker as chairman.

For Mr. Becker-- who received a bachelor's degree from Princeton and his master's and Ph.D. in economics at the University of Chicago and also taught at Columbia University--economics provided a living and also led to his second marriage.

He met Guity Nashat, a historian at University of Illinois at Chicago, while haggling over the price of a dining-room set Becker wanted to sell. Becker refused to lower the price and asked her out to dinner, according to an obituary posted on the U. of C. website.

Mr. Becker, who was also a professor of sociology, worked up until several weeks before his death.

Gary Becker, who lived in Hyde Park, also authored a blog with Richard Posner, a senior lecturer at the U. of C. law school and a judge on the U.S. Seventh Court of Appeals. His last entry, dated March 3, argued for the end of the United States embargo against Cuba. Several weeks earlier,he argued for the legalization of marijuana.

Friends said he was a people person who loved detective novels and was generous with his office hours--and his work put a uniquely human touch on the field of economics.

This sentiment was perhaps best summed up by Mr. Becker himself in a speech he gave after winning the Nobel Prize in 1992:"Economics surely does not provide a romantic vision of life. But the widespread poverty,misery, and crises in many parts of the world, much of it unnecessary, are strong reminders that understanding economic and social laws can make an enormous contribution to the welfare of people."

The award was given to Mr. Becker "for having extended the domain of microeconomic analysis to a wide range of human behavior and interaction, including non-market behavior."

The University of Chicago is planning a memorial service to honor Mr. Becker's life and work, Friday, 10:00 am at Bond Chapel. Burial will be at Oak Woods Cemetery; 1035 East 67th Street; Chicago.

To order memorial trees or send flowers to the family in memory of Gary Becker, please visit our flower store.