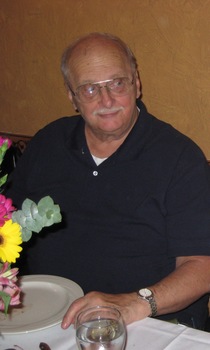 John L. Miler, Korean Army Veteran, beloved husband of Patricia, nee Alm; loving father of Kathleen (Joseph) Dahany, James, Daniel J. (Ranjana), John W. (J. Alfer), Laurie (Joseph) Fossett, and the late Michael; loving grandfather of Joseph Jr. (Sarah), Kevin, Elaine, Ryan, Ria, and Elliot; fond brother of Gerald (late Gertrude); uncle and friend of many.
John lived in Bridgeport his entire life beginning in his parents' home then spending two years in the army stationed in Colorado, to an apartment on 32nd Street, a home on Lituanica and finally back to the same house his parents had. His family were lifelong parishioners of Immaculate Conception where he attended grade school and served as an altar boy. He continued his education graduating from St. Rita High School and attending IIT. He married Patricia Alm in June, 1956, together they raised 6 children, who all attended Catholic high schools, a sacrifice for a family living on a truck driver's salary.The death of his oldest son,Michael, in 1992, was a difficult time in his otherwise blessed life. He liked nothing better than having his family around him, celebrating a birthday, graduation, communion, marriage, or nothing at all. He will be remembered as a man with a wicked sense of humor, who loved his wife, his children, bowling, golf, and the family cottage in Wisconsin. He was a member of the Knights of Columbus Archbishop Quigley Council #2428.
Visitation Tuesday 3-9:00 pm. Funeral Wednesday 9:30 am from Walter Pomierski & Son F.H., 1059 West 32nd Street, to St. Mary of Perpetual Help Church for 10:00 Mass. INT. Resurrection Cemetery.
To order memorial trees or send flowers to the family in memory of John Miller, please visit our flower store.
Send a Sympathy Card