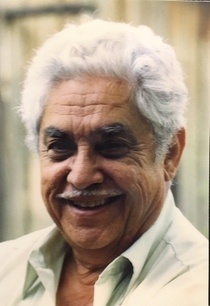 In the early hours of April 29, 2016, Mr. Raul "Rudy" Garza passed away of natural causes. Rudy is survived by his wife, Emiliana (Emily) Garza, his daughters, Mary Ahedo, Marcella Beni, Anita Garza, Paulette Khateeb and his son, Daniel and his step daughter Dorothy A. Ramirez. Rudy is also survived many grandchildren, great-grandchildren and great-great grandchildren.

Born in Cotulla, Texas on January 29, 1924, he was the youngest of three children. His older sister Zulema and older brother Hilario died in early adulthood. His mother and father passed away very early on, as well. Rudy found himself without a mother and father at the age of three. As with many large Hispanic families, he was then raised by his grandparents and his many anuts in Cotulla Texas.

Growing up in the 1920s was a very difficult time for many, the Garza's included. They grew up in extreme poverty and would do any kind of menial labor just to make ends meet and to help family survive from day to day. From those humble beginnings, Rudy started a path in life that would include many hardships, but those hardships turned out to be one of the greatest teachers of his life. He only completed the third grade but by the time he died at age 92, Rudy would have the equivalent of several college degrees.

After the hardships of childhood, Rudy joined the army, serving his country during World War II. After he was honorably discharged from the service, he came back home, moved north and took advantage of the GI Bill and put himself through barber school. For the next 30 years Rudy would work at the Hines Veteran's Administration Hospital in Maywood Illinois, walking the wards with a portable barbershop. At the same time he also opened his own barbershop in the southside neighborhood of Chicago, Canaryville.

During this time, Rudy started meeting many people in Chicago, those people would become some of his lifelong friends and others would be the acquaintances that would get him involved in the many community organizations, in which he volunteered his time. The Lions club was one of his favorite organizations to volunteer for. He served as president, vice president and treasurer during the years that he was involved with them. He also spearheaded the formation of a charter group of young people called the Azteca Leo club. Its core mission was to serve the underprivileged and the blind.

Rudy also participated in the Mexican Golf Association, bowling leagues, Parent Teacher's Association, local school council's, and countless other organizations whose focus was serving the community in various capacities. He never stop volunteering and it seemed like he never tired of it either. All the way up until his 70s he was volunteering his time. One of his last greatest volunteering was at the Fort Smith Arkansas trolley Museum. The museum was run by his 76th division, army buddy, Dr. Art Martin. Rudy spent several months out of each year, going to Arkansas and volunteering his time restoring old trolley cars. He had been written up several times in the Fort Smith area local newspapers as the extraordinary volunteer who spent many many hours giving time to the museum and it's restoration of historical trolleys. He was given the Keys to the Frontier by the mayor of Fort Smith, Arkansas.

Through his entire life Rudy found himself coming to the aid of those in need. He never hesitated to solicit donations from different offices, businesses, and organizations in order to help out those who were in need. Always a kind and generous heart, Rudy never hesitated to lend a hand when needed. Rudy also invested in several people's education. He couldn't stress the importance of education enough. He helped several people with loans to complete their degrees, or by sending a few dollars to family members in school, to help with books or tuition. He always encouraged people to go further than he had, to go further than the last generation, to go further than a person would ever dream of.

Talent shows, parenting, traveling, cooking, entertaining, building, gardening, raising ducks, buying a chili parlor, walking the streets picking up aluminum cans, delivering flowers, dropping of food for the homeless, donating things to the old veterans home, donating things to the American Indian center, those are the things that Rudy was made of, his heart was kind generous and made of gold.

92 years seems like a very long time to be alive, however in recounting many of the things that Rudy did in his life 92, years doesn't seem like it was long enough. A man who came from very humble beginnings accomplished things that many of us would not be able to accomplish in two lifetimes. Men like Rudy are one in a million. We will miss his smile, his never ending sense of humor, his ability to walk into a room and make people laugh, his ability to make friends at the drop of a dime and most of all, we will miss his spirit--may he rest in peace.

To order memorial trees or send flowers to the family in memory of Raul "Rudy" Garza, please visit our flower store.