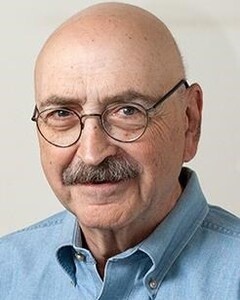 Richard Simon Levy Richard Simon Levy was born in Oak Park, Illinois, on May 10, 1940, to Roy A. and Helen E. (Loeffler) Levy. He died in Chicago on June 23, 2021. He graduated (Phi Beta Kappa) from the University of Chicago in 1962, and went on to earn a master s degree (1964) and a PhD (1969) in German history from Yale University. From 1967 to 1971, he taught at the University of Massachusetts, Amherst. In 1971, he moved to the University of Illinois, Chicago where, for nearly fifty years, he taught courses in German history, the history of antisemitism, and the holocaust. Richard was a widely recognized authority on the history of European antisemitism and wrote or edited numerous books and articles and delivered dozens of papers on the topic all over the United States and abroad. He was the editor of Antisemitism: Historical Encyclopedia of Prejudice and Persecution (2005). He was also a prolific reviewer (including close to two hundred reviews for the librarians' journal, CHOICE) and an experienced translator of historical documents from the German. In 2001, he was Fulbright Senior Professor in Pisa Italy, and after 2011, adjunct professor of German Studies at Duke University. Richard loved good music, good food, good old movies, good friends. He loved working with his hands and playing pool and baking bread. Most of all, he loved Linnea, his wife of more than half a century. He had a wry and occasionally devastating sense of humor that kept friends and family laughing, and punctured pretension in others when he came across it. Unlike his father before him, he lived to see the Chicago Cubs win the World Series. And when the Cubs finally did win, he took the newspaper with the headline to his father's grave. At the Scrabble board, he was without mercy. He was preceded in death by his parents, and cousins Leonard and Robert Levy, and by two aunts and uncles, Marian and Henry Pollack and Elmer and Della Levy. He is survived by his wife Linnea of the home, and by his brother David (and Lynne) in Norman, Oklahoma; by his brother-in-law and friend, Jon Randolph; by his fond nieces and nephews, Beth (and Joel) and Benjamin (and Martha) of California, and by cousins Betty (and William) Shapiro of Philadelphia and Carol Jo Brown of California. Richard didn't want any formal services. Those who wish to honor his memory can contribute to awards set up in his name by going to the UIC giving website and putting "The Richard S. Levy Endowed Fund in History" in the box marked "Other Funds." Or, you can send a check to "The University of Illinois Foundation", referencing "The Richard S. Levy Endowed Fund in History" in the memo line, and mailing it to: University of Illinois Foundation, P.O. Box 734500, Chicago, IL 60673-4500.

UIC Prof. Richard S. Levy, one of the foremost experts on the history of antisemitism, dead at 81

He edited ‘Antisemitism: A Historical Encyclopedia of Prejudice and Persecution,’ which ‘has sort of become the first stop for anyone wanting to study the history of antisemitism.’

By Maureen O'Donnell Jul 9, 2021, 5:15am CDT
Richard S. Levy, who grew up to become one of the nation’s foremost experts on the history of antisemitism, first experienced it as a young boy.

He was about 5 when a nun at the Catholic school he was attending shushed noisy students with a comment that prompted his parents to pull him out of the school the next day.

“One of the nuns said, ‘I want you to be quiet. The last one talking is a Jew,’ ” his brother David Levy said.

At 11, “One of the kids in class was having a birthday,” said his wife Linnea. “The mother talked to her son about inviting all the kids who were standing around playing baseball. But Richard heard her whisper to her son, ‘Not the Jew.’ He told me about that story and how it hurt.”

Mr. Levy, a history professor at the University of Illinois at Chicago who taught for nearly half a century on the Holocaust, antisemitism and German history, died of prostate cancer June 23 at his Lake View home. He was 81.

His dissertation became the ground-breaking 1975 book “The Downfall of the Anti-Semitic Political Parties in Imperial Germany.”

“There was a tendency to say antisemitism was in the air of this country,” said Peter Hayes, a retired Northwestern University history professor. “Richard said ‘No, it’s more complicated.’ He makes the argument that there were more effective structures to fight antisemitism before 1918” in Germany.

In addition to many articles, translations and contributions to books, Mr. Levy edited the two-volume 2005 book “Antisemitism: A Historical Encyclopedia of Prejudice and Persecution.”

“It was a huge international undertaking, where he got a large number of very important professors and scholars to contribute,” said Kevin M. Schultz, who chairs the UIC history department and said the encyclopedia “has sort of become the first stop for anyone wanting to study the history of antisemitism.”

Mr. Levy’s 1996 book “A Lie and a Libel: The History of the Protocols of the Elders of Zion” explored the persistent and widely circulated conspiracy theory that proclaimed Jewish people were preparing for world domination.

Though he spent part of his childhood in Cicero, his parents Roy and Helen were heartsick at the violence directed at Harvey E. Clark when the Black CTA driver and World War II veteran tried to move his family to the west suburb in 1951. Thousands rioted, and the Levys decided to move to Berwyn, his brother said.

Mr. Levy’s father liked discussing history at the dinner table and took his sons on a trip retracing the path of the Union Army, stopping at battle sites including Gettysburg and Antietam, said David Levy, a retired history professor at the University of Oklahoma.

Their father had applied for a job with the Chicago Daily News on Feb. 14, 1929 — the day of the St. Valentine’s Day massacre. The paper had a scoop on the gangland bloodshed that turned a Clark Street garage into an abbatoir and, to prevent a leak, “They locked the doors of the Daily News,” David Levy said, keeping everyone inside until the paper hit the street. “My father reported saying to himself, ‘This is a very exciting place to work.’ ”

The father was hired as an ad salesman. His specialty was movie ads.

“That’s part of the reason Richard developed such a love of movies,” his brother-in-law Jon Randolph said.

Mr. Levy’s UIC office was decorated with a German poster of the Charlie Chaplin film “Modern Times.” If a student professed interest in movies, he’d give them his list of Hollywood classics, which always included the Marx Brothers.

Every semester for about two decades, he advised more than 100 history majors and another 50 or so students with minors in history.

As a result, Schultz said, “Every day, there was a line of students waiting outside for him, and they would go over their schedules and make sure they were doing everything they needed to graduate.”

His class on the history of the Holocaust was always the first to fill up at registration time, Schultz said.

“He was a mentor,” said Linnea Levy, who was married to him nearly 54 years. “He had the gift of being kind without being condescending.”

At home, Mr. Levy made delicious baguettes and pizzas. He and his wife “cooked for each other every night,” Randolph said.

His family said he was a cutthroat Scrabble competitor and a skilled pool player who played at Chris’s Billiards on Milwaukee Avenue, where scenes were filmed for the 1986 Martin Scorsese film “The Color of Money.”

To order memorial trees or send flowers to the family in memory of Richard Levy, please visit our flower store.