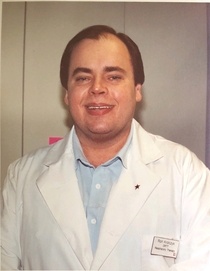 Ronald Joseph Krolczyk, 65, of Mesquite,Nevada, passed away on
July 8,2020.  Born in Chicago to his late parents Joseph and Josephine Krolczyk, his childhood was spent in both Texas and primarily in the Bridgeport neighborhood, graduating De La Salle High School in 1973.  Ron is survived by his sister Karen (Michael) Hosman, and nieces Tara Michelle Hosman (god-daughter), Claire Ella Hosman, and Pearl Anne Hosman.
As a third-grader in Texas, miraculously recovering from Guillain-Barre Syndrome, he became one of the first students to experience remote learning from home using a specially designed intercom. This even caught the attention of President Kennedy, who wrote Ron a letter.  Back in Chicago, Ron served as an altar boy while attending St. Mary of Perpetual Help elementary school.  (He enjoyed washing cars at Pomierski Funeral Home!)    He was a paramedic for the City of Chicago, and was honored to be one of the first responders when Mayor Richard J. Daley had his massive heart attack.  After the strike under Mayor Byrne, he went on to become a Respiratory Therapist, working at Mercy Hospital and then Edward Hospital, receiving recognition for his friendly, professional and compassionate care.  When his beloved parents retired, Ron relocated to Nevada to help care for them (though he never stopped craving Chicago and Polish food).  He subsequently enjoyed his own retirement at the Highland Manor of Mesquite, where he was known as a very pleasant, respectful, thankful, optimistic and jovial person.
He was an avid sports fan. He loved listening to his radio programs and music. He loved dogs (overcoming his fear after being bitten by one), cars, humor and jokes; watching old Laurel and Hardy shows; Catholic prayers and the Sacred Heart of Jesus, and was a member of the Knights of Columbus.  He had overlooked creative talents in illustrations and story-telling.  He had a penchant for medicine, known to match wits with his doctors. His ever-present smile (which often got him into trouble as a youngster), rich voice, big heart, brotherly advice and comfort will be missed.
Family and friends will gather Friday, August 14th at 11:00 am for a mass of Christian burial at St. Mary of Perpetual Help Church, 1039 West 32nd Street in Chicago. Interment will follow at Resurrection Cemetery. (773) 927-6424

To order memorial trees or send flowers to the family in memory of Ronald Krolczyk, please visit our flower store.