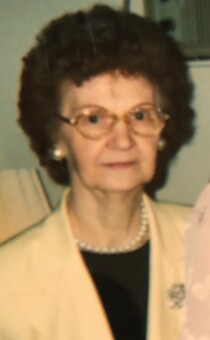 Rosemary was a member of St. Mary of Perpetual Help Mother's Guild and room mom, and a former member of the Daughters of Isabella Copernicus Circle.

She was the 7 th Daughter of Anna and Adolf Korenkiewicz.  Anna was born in 1888 where St. Mary’s gym stands on 32 nd and Aberdeen.

4 Generations of Rosemary’s family have been Baptized, Schooled, Married and Buried from St. Mary’s of Perpetual Help Parish.

Rosemary and Ray were married in 1953 and in 1954 started their family.  Ray Jr. was born and was her Pride and Joy.  Raymond could do no wrong in his Mother’s eyes.  3 years later she was blessed with twin girls, Jane and Mary.  She was very protective and strict, especially with her girls.

She loved the Holidays and giving gifts to all of her family.  Rosemary was a fantastic cook and baker and all from scratch.

The next generation of her family came along with her Grandchildren, TJ, Genny, Ray, Matthew and Tori.  And they became her new Precious Things.

She never stopped worrying about any of them and even more importantly never wanted anyone to worry about her.

She loved seeing how her children had created their own families.

She never liked being the Center of Attention, but quietly her family was always the

To order memorial trees or send flowers to the family in memory of Rosemary Akers, please visit our flower store.
Send a Sympathy Card