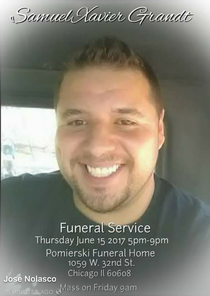 It is with great sadness that the family of Samuel Xavier Grandt announces his sudden passing away on Monday, June 12, 2017, at the age of 28.

Samuel, also known as Sam or Sambo, had an infectious smile and witty sense of humor that could not keep you from laughing. Sam graduated from Archbishop Quigley Seminary in 2007. He was known for being a hard worker, who was helping build his Father's truck driving company on the south side of Chicago. One of his favorite hobbies was singing and writing country music.

Memorial donations in memory of Sam and towards his son, Aiden's Fund, are most appreciated and can be made to Guillermina Grandt, 4821 South Racine Avenue, Apartment #1, Chicago, IL 60609

To order memorial trees or send flowers to the family in memory of Samuel Grandt, please visit our flower store.