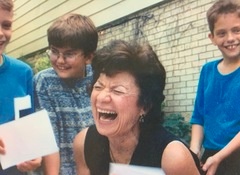 Shirlie Ward, of Northbrook, IL, passed away at the age of 94 on September 1, 2021 at the home of her loving son and daughter-in-law in nearby Lake Villa.

Shirlie was born in Denver on September 22, 1926 to Fred and Lela Dickerson (Thomas). She graduated from Monticello, a two-year college in Godfrey, Illinois, and then went on to graduate from the University of Denver with a Bachelor of Arts degree in Languages.

Years later when she and her children and grandchildren visited the Monticello campus, Shirlie pointed to the second story window from which she and her roommate had tossed their friend’s mattress as payback for a prank she’d pulled on them.

She married Phil Ward of Riverton, WY on May 27, 1950, after which they embarked on the adventure of moving to Chicago with “nothing but a mattress on the roof of their car” so Phil could attend the School of the Art Institute of Chicago to study cartooning. They fell in love with the Chicago area and made a happy life there until Phil’s passing in 1993.

Shirlie loved the Kenny Rogers song, “Lucille,” and would sing along – and require the rest of the family to sing along as well, adding her own gestures and looks of indignation at the appropriate spots. She wrote a second verse where Lucille gets her comeuppance.

Shirlie's volunteer activities included sharing her love of gardening with kids from the city at the Chicago Botanic Garden; teaching English as a Second Language to Polish, Mexican, and Asian immigrants; and shelving books at the Northbrook Public Library, which led to a fulfilling career from which she retired at the age of 80 as the library’s Volunteer Coordinator. She had many joys in her life including tennis, sewing, dancing (which she taught at Arthur Murray), gardening, music, continually brushing up on her Spanish, and traveling the world with Phil.

But her greatest joys were raising her children, Mike (Susie) and Pam, and eventually doting on their kids, Kevin (Jen), Matt (Danya), Paul, Pat (Stephanie), and Jeanette (Eddie), all of whom thoroughly adored her back. She was preceded in death by her beloved older sister, Barbara Hart (Bob), of Tucson, AZ, and survived by her cherished younger sister, Carole Dickerson, of Hogansville, GA.

Her generosity, selfless support, wit, wisdom, and the countless comforts she gave to her family have inspired two generations to emulate her examples, and a third generation will follow soon as her legacy of strength and kindness continues.

A casual celebration of her life will be held on Saturday, December 4, 2021, 11:30 AM at Allgauer’s on the Riverfront, 2855 Milwaukee Ave, Northbrook, IL 60062.  Donations to the Chicago Botanic Garden are appreciated.

To order memorial trees or send flowers to the family in memory of Shirlie Ward, please visit our flower store.