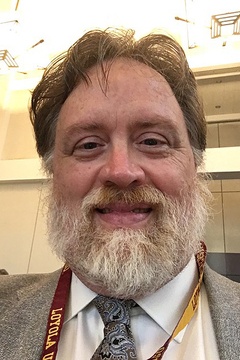 Thomas Bruce Levergood, returned to the house of the Father on August 6 th after a short battle with cancer. Born on August 16, 1962, in Detroit, Michigan to the home of John and Mary Elizabeth Levergood of Royal Oak Michigan, both emigrés from Canada. His dual US-Canadian citizenship was often celebrated by Thomas as he invited friends and students to raise a glass, and then toast the queen.

Thomas developed a love of reading and an interest in history and government at an early age. He first cut his teeth in the organizing of political campaigns in his high school years. In 1980, Thomas moved to Hyde Park to begin studies at the University of Chicago, graduating in 1984 with a BA in political science with honors, as a Phi Beta Kappa Scholar, and as a Harry Truman Scholar.

Following college, Thomas spent one year in Munich, Germany. He also spent two years in Paris, teaching in a high school, and studying at École de hautes études, including participating in a secret seminar led by the Czech writer, Milan Kundera. In 1991, Thomas returned to the University of Chicago to pursue doctoral studies in the Committee on Social Thought.

Thomas co-founded the Lumen Christi Institute in 1997 with a vision to make the Catholic intellectual tradition a vital part of the culture of today’s university, in Chicago and across the nation. An intellectual impresario, Thomas brought world-renowned Catholic scholars and bishops to speak at the University of Chicago, making the Lumen Christi Institute a hub of Catholic intellectual activity. His close relationship with Francis Cardinal George, former Archbishop of Chicago, helped establish Lumen Christi as a forum for church leaders and scholars to engage in dialogue.

Thomas established a permanent home for the institute adjacent to the University of Chicago with the purchase of the Gavin house in 2011. A gifted institution-builder, Thomas also played an instrumental role in inspiring and catalyzing the founding of similar institutes at other universities around the world. He also helped catalyze the creation of the Catholic Research Economist Discussion Organization and played a critical role in the establishing of the Society of Catholic Scientists.

Thomas is survived by his siblings, Joan (Douglas) and Richard (Susan), his nephews and niece, Matthew (Hillary), Rebecca (Kyle), and Jacob, great-nieces and great-nephews Briella, McKinley, Callum and Greyson. Thomas is remembered fondly his many friends from around the world. He was preceded in death by his parents Mary (Bailey) and John Levergood. He is remembered fondly by his Aunts Marie Bailey and Muriel Newman and cousins Sandford (Susan), Suzanne (Ron), Paul (Mandy), Catherine (Rupert), Ellen (Peter), and Mary Lynn (Paul).

The funeral mass will be held at St Thomas the Apostle Parish in Hyde Park at 11 AM, Saturday, August 14 th , with a short visitation preceding at 10 AM. RSVP encouraged. Up to date details and RSVP can be found at www.lumenchristi.org/thomaslevergood .

In lieu of flowers, the family requests that memorial gifts be directed to:

To order memorial trees or send flowers to the family in memory of Thomas Levergood, please visit our flower store.